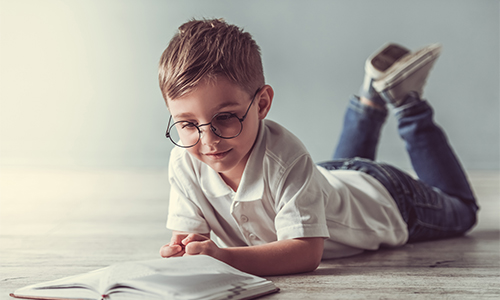 Anansi and the Moss Covered Rock, by Eric Kimmel

Anansi the spider tricks everyone around him into coming to his newly discovered magic rock, where they fall asleep so that Anansi can steal their food. After observing this from afar, it is ultimately up to the small and shy Little Bush Dear who must move to action in order to outsmart Anansi and return the food to its rightful owners.

Based on a West African tale, Kimmel strings together the text in a rhythmic and suspenseful way, engaging the reader all the way to the conclusion. The illustrations capture the tricky, humorous nature of the tale.

Little Bush Dear is the story’s unlikely hero, after he carefully calculates a way to outsmart Anansi the trickster. Size or speed do not matter; thinking is a far greater tool!

Hershel and the Hanukkah Goblins, by Eric Kimmel

Hershel needs to get rid of the goblins who haunt the village synagogue, or else the villagers cannot celebrate Hanukkah. In order to do so, he must spend eight nights in the synagogue, where he manages to outwit them one at a time, despite his fear.

This book’s timing is exceptional, and the story is engaging and entertaining – with a spooky edge. The colors and illustrations correspond nicely to further exemplify the mood.

Bravery is a defining theme in this book. Though Hershel is fearful of the goblins, he continues to confront them – in doing so, his courage in the face of fear makes him truly brave.

Rumplestiltskin, by The Brothers Grimm

After a father lies about his daughter’s magical prowess, she is taken prisoner and left to do the impossible: to spin straw into gold. When a small magical man appears and offers to help her, she accepts – after promising her firstborn child to him. The king, so impressed with her perceived talents and beauty, marries the girl and takes her to his kingdom, where she soon bears a child. When the little man comes for the baby, the girl must rely on trickery and spying to outwit him.

This story represents the dark side of human nature prevalent in most of the Grimm fairy tales. A girl is loved mostly for her beauty and magical powers, though she shows her intelligence when outsmarting Rumplestiltskin.

A cautionary tale, children may be taught the folly of bragging about untrue abilities. When a lie is told, it has far-reaching consequences. In this case, a father’s lie reached into another generation, almost causing his grandchild to be taken by a mischievous and suspect individual.